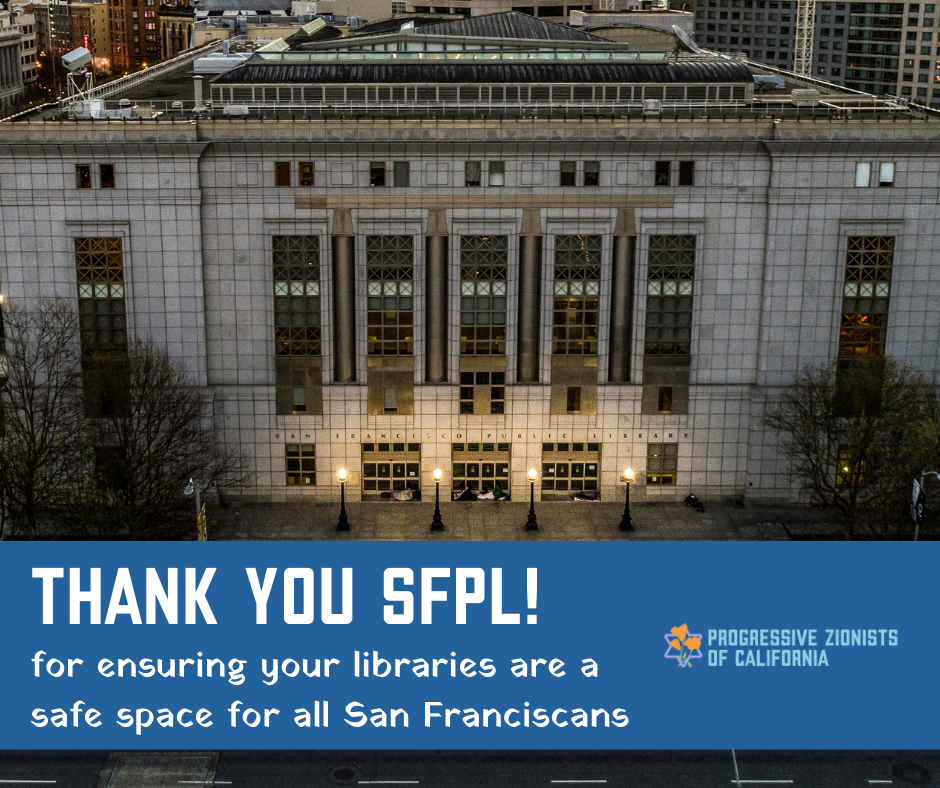 We are writing to thank you for saying no to a mural that targets and marginalizes all Jews and non-Jews who support Israel’s existence as a Jewish and democratic state and a lasting peace between the Israeli and Palestinian people.

Progressive Zionists of California (PZC) is a grassroots collective of California Democratic Party activists and leaders—many of whom live in San Francisco and the Bay Area—who are focused on educating the public about antisemitism and Zionism. As progressive Democrats, we oppose all forms of bigotry, and are committed to working with vulnerable communities to undo systemic oppression together and support progressive policies at the local, state, and federal levels.

This is why we are immensely grateful that the San Francisco Public Library was clear that the phrase, “Zionism is Racism” is “antisemitic and harmful” and that the mural did, as the library also stated: “negatively target [a] specific race/ethnic community.”

Zionism is the human right to self-determination of the Jewish people in their ancestral homeland. Unfortunately, an inordinate amount of misinformation and disinformation abound about what Zionism is, and it is important that the discriminatory and false characterization of “Zionism is racism” not be condoned in the public eye.

In fact, the United Nations upholds self-determination as a human right. Jews are a nation with an ancient history, language, and culture, indigenous to the Levant. Israeli Jews are or are descended from refugees who have faced antisemitic discrimination, displacement, destruction of property, and death. We are committed to a safe and secure Israel that guarantees the future of the Jewish people in their ancestral homeland; and Zionism in no way precludes the existence of an independent and sovereign Palestinian state, an outcome that we view as necessary and just for a peaceful solution to the conflict.

Once again, we thank the San Francisco Public Library for not allowing a harmful and false message to be perpetrated on its walls.

Daniel Bral
Chair, Board of Directors